After unification many East Germans rushed to replace their ‘Trabi’ with a West German car. Accordingly, there was huge demand in the new East German states, first for used cars, and soon for new vehicles as well. And once again, MOSOLF was ahead of the game in those transitional years: Looking ahead, management had already started thinking about opening up new markets in spring 1989, as the first hole in the ‘Iron Curtain’ appeared when Hungary dismantled its border controls. And thinking was followed by actions: the company erected a logistics and services centre in Glauchau, Saxony, before the year was out! ‘The fall of the Berlin Wall came as a surprise to us, too, of course’, Dr. Jörg Mosolf reminisces. ‘Nevertheless we had already been dealing with the subject of Eastern Europe since the events in Hungary. For lack of available data we were not able to conduct a concrete market analysis, but we were starting to think about the opportunities and ready to take action. Then we decided to take the risk of taking a step forward. And because our fast decision-making processes made the project succeed so quickly, we enjoy a very high market share in East Germany today.’

With its subsidiary in Glauchau, MOSOLF was settling in a territory marked by automotive history, as the Trabant had been produced right nearby at VEB Sachsenring Automobilwerke Zwickau from 1959 to 1991. In autumn 1990 the Volkswagenwerk Zwickau began production, for which MOSOLF has provided both logistical and technical services since 1991. The company is now represented by three subsidiaries in Saxony and Thuringia, where it also works for the automobile manufacturers Daimler, BMW and Porsche. 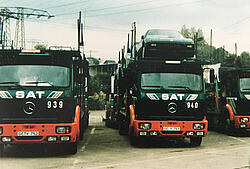