‘Another half mile to Etzin… Its shingle-covered church spire lies before us as if we could reach out and touch it … and yet before we have sung through our store of wandering songs a third time, we march merrily and confidently into the picturesque old village. Everything reveals prosperity, but at the same time that sense of humility which is expressed in loyalty and devotion to tradition.’ With these words the writer Theodor Fontane described the town in 1873 in his famous Wanderungen durch die Mark Brandenburg (‘Ramblings through Brandenburg’). At the time Etzin was still a tranquil village in the Havelland region; today it is a district of Ketzin, a small town located amid an extensive lake-landscape between Potsdam and Brandenburg an der Havel. The once tranquil village has become a modern rural community that focuses on agriculture, but also exploits its tourist potential. Why did Mosolf decide to establish his new logistics and service centre here of all places? ‘In the search for a suitable site there were four criteria that had to be fulfilled’, explains Wolfgang Pfandke, the project’s former chief representative and site coordinator. ‘First, the site had to be located west of Berlin. Etzin is about 20 minutes west of Berlin by car. Second, it had to lie along an efficient railway line; in our case, the high-speed stretch between Hanover and Berlin. Third, there had to be a shunting station, and there are actually two of those in the vicinity. And fourth – the most important condition – the site had to be located near both a motorway and a road to Berlin. The A10 motorway runs to the east of the community, and the federal road B5 leads directly into Berlin. So Etzin fulfilled all the conditions. And there was also still enough land available.’

Since Mosolf’s plans involved the creation of several hundred jobs, they also generated great political interest. As a result, the company was ultimately able to purchase a contiguous area of around 2,000,000 square metres for its new subsidiary. ‘In terms of area, we were the third largest investor in the state of Brandenburg at the time’, says Wolfgang Pfandke. The groundbreaking ceremony took place on 27 May 1993, with Marianne and Horst Mosolf planting an oak tree as a symbol of the company’s strength and responsibility for its employees. Then on 1 June 1994 came the grand opening and launch of the new Logistics and Service Centre Berlin-Brandenburg – a location of superlatives: On an area of over 1,000,000 square metres, a subsidiary of impressive size had emerged with a multi-facetted range of services: Offering storage capacity for 30,000 vehicles, it can handle around 250,000 vehicles each year. If a customer so desires, Mosolf is thus also able to store large numbers of cars that can be accessed at any time. The space is equipped with four railway lines with unloading ramps for the cars, which are first brought to the Wustermark station on the high-speed Hanover-Berlin railway, and then transported to Etzin by the Havelländische Eisenbahn (‘hvle’). In addition, there are around 70 spaces for trucks to load and unload their cargo. On a further 20,000 square metres of production space, extensive technical work is performed and many services performed. According to the wish of Horst Mosolf, the Brandenburg subsidiary was also built in the typical architecture of the region. With a total investment of 46.9 million euros, the subsidiary features state-of-the-art workshops, including painting lines, lifting platforms and an automated car wash. Around 3.5 million euros of this were allocated to precautionary environmental measures that protect the sensitive water  resources in the Havelland region.

With this huge investment Mosolf took another high business risk, as there were certainly many imponderabilities with regard to future developments in the years immediately after reunification and the opening of Eastern Europe. But this time, too, the company’s boldness and entrepreneurial spirit were rewarded: the Logistics and Services Centre Berlin-Brandenburg soon earned an excellent reputation far beyond the region as a capable, efficient partner. As the premier of Brandenburg at the time, Matthias Platzeck, expressed it on the occasion of the subsidiary’s tenth anniversary in 2004: ‘When you made the decision over ten years ago to erect another location in Etzin, Brandenburg, it was not only strategically motivated, it also came from the heart. … Your entrepreneurial vision has been rewarded. In the past ten years you have performed development work of the best kind: Over the years you created around 350 jobs and contributed to the region’s solid reputation as a business location!’ One year later, Mosolf was awarded the Wirtschaftsförderpreis of the Havelland district for the company’s constant achievements in economic development. 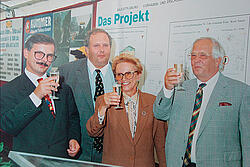