Parallel to its activities in East Germany, in the 1990s Mosolf also expanded its network in Western and Central Europe. In 1995 the Carcenter in Zeebrugge, Belgium, was founded. This gave the company another location at an important maritime port that is still used intensively by the automotive industry for handling new vehicles today. In 1998 Mosolf established the MLT (Mosolf Centre Logistique et Technique) and MCT (Mosolf Centre Technique) in Hambach, France, where the company has found success as an extended workbench supporting production of the Smart ever since it was launched on the market. The same year saw the founding of MAL (Mosolf Automobillogistik) in Dobrovice, Czech Republic, around 60 kilometres northeast of Prague, and of MOSTVA in Mszczonów, Poland, a good 40 kilometres southwest of Warsaw. Covering an area of 450,000 square metres, the latter has the capacity to store 12,500 and handle around 150,000 vehicles each year. In contrast to some other companies, Mosolf succeeded in finding a long-term foothold in the East European market.

Asked about the reasons for this success, Wolfgang Göbel, managing director and chief sales officer of the Mosolf Group says: ‘Part of this is certainly the fact that we were always open and fair and wanted not just to make money in the short term, but to build something lasting. Our local negotiation partners honoured that. What is more, we had a clear idea and always offered quality.’ 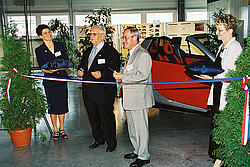