Following the company’s concept of integrated, environmentally friendly logistics, in 1999 Mosolf took a further step toward utilizing new routes: At the port of Düsseldorf, an important reloading point for car transports, Mosolf opened a multi-mode logistics and services centre, so that it would be able to ship large numbers of vehicles down the Rhine to the North Sea ports, and from there to overseas destinations. With this the Swabian family company had achieved an ecologically and economically advantageous expansion of its capacities. After all, using the inland waterway as an alternative to road transport meant not only a reduction in CO2 emissions, but also cost optimization, because the water route could also be used on Sundays and holidays. For its activities on the water, Mosolf had chartered the RoRo (Roll-on/Roll-off) ship Terra from the Dutch shipping line Elbert, which could transport up to 650 vehicles – about 80 truckloads. Another advantage of this type of ship over classic container vessels is the significantly shorter loading and unloading times. At this location, too, Mosolf and Daimler continued their years-long cooperation in which Mosolf transported Sprinter vans produced at the Mercedes factory in Düsseldorf to Rotterdam and Antwerp.

Not only did the new subsidiary prove viable, in 2014 Mosolf even expanded its fleet for a further large-scale contract with Daimler by adding a second RoRo ship. ‘The barge constitutes an efficient, environmentally friendly alternative to road transportation. Since the capacities of the major contract with Daimler could not be served with a single ship in the long term, we adjusted our inland shipping concept accordingly’, explains Dr. Jörg Mosolf. In keeping with the company’s demands for the latest technology, the Terra2 is equipped with an innovative hybrid engine, with which Mosolf is a length ahead of the competition in the water as well. And last but not least, this step once again demonstrated the visionary farsightedness of the company’s founder, as long-time Mosolf employee Rose Nägele recalls: ‘Shortly after I started with Mosolf in December 1978, I heard about the idea of using a barge to transport cars. That was one of Horst Mosolf’s dreams. Shipping cars with a barge?! That seemed a bit far-fetched to me at the time. But then it was actually done! “Look”, I said to myself, “if you are convinced that something is possible, then you can do it. You just can’t give up, you have to stay persistent and keep trying until you’ve achieved your goal.” 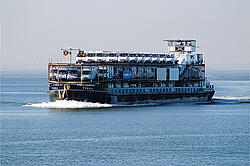