Car and train? Even today, in the minds of many a logistics company these two means of transport do not match up. This is not the case for Mosolf: With the goal of creating a powerful, multi-modal range of service, the company decided to expand its rail activities and also carry out its own transports by rail. For this purpose it founded a separate company in 2007 called MAR (Mosolf Automotive Railway). The company’s double-decker railway cars are designed to transport passenger cars and utility vehicles. A complete train with 20 wagons can carry up to 320 automobiles. The railway cars are deployed throughout the Mosolf Group’s entire European transport network, which is circumscribed only by those countries that use a different track gauge like Spain. Mosolf carries out largescale railway transports for many automobile manufacturers, above all in Eastern Europe. For instance, PKP Cargo, the largest rail freight company in Poland, has transported around six whole trains each week on Mosolf’s behalf since 2011 on the 400-kilometre stretch between the Fiat production site in Tychy near Kattowice and Wustermark in Brandenburg. ‘For years we have been taking traffic off the roads and putting it on rails. Now we are showing once again how the railway is becoming more competitive through intelligent process engineering. Ultimately, quality, price and time will ensure that trains, as an environmentally friendly means of transport, will prevail against other means of transport. In this case economic success helps the environment and ensures the jobs of everyone involved’, declared Dr. Jörg Mosolf as this collaboration was launched. 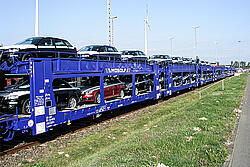