Where do the experts of the future come from? And what can the logistics industry do against the dramatic shortage of professional drivers? At the Forum Automobile Logistics in Munich, which was organized by the German Logistics Association (BVL) and the German Association of the Automotive Industry (VDA), Joerg Mosolf, owner of the company group of the same name and president of German Transport Forum (DVF), summed up the situation of the logisticians: "We have a shortage of skilled workers at all levels. That's why we have to offer young people a future and support the next generation.”

Around 3.2 million women and men work in the approximately 60,000 companies in Germanys third largest economic sector - and more specialists are urgently needed. The shortage is currently particularly great for professional drivers who move goods in local and long-distance transport. "At the moment, there is a lack of about 45,000 drivers each year," explained Joerg Mosolf. In addition, many drivers will retire from active working life over the next few years due to their age: "One million out of 1.5 million drivers in Germany are older than 45 years. Forty percent of them will retire in the next ten to fifteen years," said the honorary president of German Transport Forum. Even though digitization and automation were increasingly acting as drivers, it would take a long time for people to run light and heavy commercial vehicles. However, there is no such thing as a patent remedy for the lack of drivers: "We have to improve the lives of the drivers and work therefore together", demanded Joerg Mosolf.

Experts agree: To avert the impending shortage of skilled workers, especially young people have to be enthused for a job in the logistics sector. "As the recent World Bank study showed, Germany is 'logistics world champion' for the third time. We see our industry as the cardiovascular system of the German economy. We have taken up a leading position in many fields. But logistics still does not have a good public image, "stated Joerg Mosolf. But moaning is not a solution. Together with about 70 other companies and associations, his company therefore participates in a nationwide image campaign called "logistics heroes", which is scheduled to launch in April this year. On its own website as well as in videos and advertisements, the business sector wants to provide information on apprenticeships, study programs and job opportunities and present itself as an attractive employer. 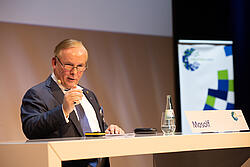