Skip navigation
MOSOLF extends its compound in Kippenheim from 90 ha to 94 ha. Space for a further 2,000 vehicles. Transport operations switched from trucks to railways. 70 new jobs created in Kippenheim since 2015.

Kippenheim/Kirchheim unter Teck, 4 July 2017. Following building work that lasted only three months, the southern extension of the MOSOLF business site in Kippenheim was opened at a special ceremony on 3 July 2017. The branch manager Meinrad Rein and the board members from the MOSOLF Group welcomed the invited guests from Germany and further afield; they included the mayor of Kippenheim, Matthias Gutbrod. Meinrad Rein emphasised in his opening speech that the four-hectare extension, which increases the size to 94 hectares, was important for the business site in Kippenheim due to the high demand from customers. The additional area provides space for a further 2,000 vehicles.

“However, traffic on the roads won’t increase as a result,” said Dr Jörg Mosolf, CEO of MOSOLF. More vehicles will be transported by rail. Railway traffic between Kippenheim and Düsseldorf was deliberately reactivated for this purpose in March in order to ease the pressure on the roads – a block train replaces 35 special vehicle transporters. Compared to the previous year, the proportion of vehicles transported by rail will increase by 10 percent in 2017 to a figure of 26 percent.

“According to the development plan, eight natural habitats were created to provide ecological compensation for the construction space. LED masts with solar panels are also being used at the new site and they’ll be installed at other business sites in future too,” Dr Mosolf said.

MOSOLF has not only extended its working space – the number of employees is also growing thanks to the increasing demand for services. More than 70 new jobs were created in the last two years alone with a result that the business site in Kippenheim currently employs 400 people. This is very positive, even if the current shortage of specialist staff, particularly in terms of truck drivers, vehicle painters, bodywork mechanics and vehicle mechatronics experts, is making it hard to find suitable personnel. MOSOLF is investing a great deal in this process and traditionally relies on its own young workers and the networking of skills within the MOSOLF Group. 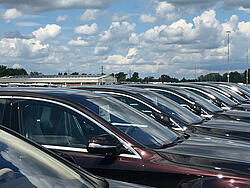