Skip navigation
Kirchheim unter Teck, May 27, 2019 – The MOSOLF Group is planning to set up sustainable railway services along the New Silk Road between Europe and China. The aim is to also transport finished vehicles via the rail link between Lodz in Poland and the Chinese city of Chengdu in future. Test operations are due to start during the second half of 2019. MOSOLF has already signed the initial contracts for suitable operating sites along the route. Moreover, the automobile logistics specialist has set up its own subsidiary in China responsible for the company’s rail activities on the new route.

The aim of the project is to enable the existing Chengdu-Euro Express Railway to also transport finished vehicles. This rail service has been operating between Qingbaijiang station in Chengdu and Lodz since 2013. It crosses the Chinese border at the Alataw Pass in the province of Xinjiang, then passes through Kazakhstan, Russia and the Republic of Belarus on its way to Poland.
The automobile logistics specialist MOSOLF has now laid the foundation for its new rail project. The agreements covering the renting of operating sites with rail access were signed with the Chengdu Qingbaijiang District People's Government on May 24 in Munich.

MOSOLF will provide the pre-carriage operations by road and rail and will load the vehicles into containers using its own personnel at the company’s operating site. This will be directly linked to the Spedcont railway terminal in Lodz. Spedcont will be responsible for handling the containers, including loading them on to railway wagons, as well as managing the empty containers. Special rack systems will be used to ensure that the vehicles can be shipped reliably and efficiently.
“Customers will benefit from end-to-end quality management, direct links between the railway terminal and the container terminal as well as daily departures on this main line along the New Silk Road between Europe and China,” says Wolfgang Göbel, CSO of the MOSOLF Group. He adds, “Our investments in real estate, facilities, personnel and equipment will continue to promote the Chengdu-Euro Express Railway as the best possible solution for European vehicle manufacturers that wish to export their products to China.” 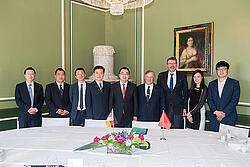