Skip navigation
Barcelona, Kirchheim/Teck, 27 March 2017 – The Spanish Tradisa Group is taking over the shares held by the German automobile logistics specialist MOSOLF in their joint subsidiaries Tramosa France based in Creutzwald and Tramosa Logistik, which has its headquarters in Saarlouis. The two companies reached agreement on this at the beginning of March. The transaction is due to be concluded in the third quarter of 2017 at the latest.

The aim is to gear the corporate network more strongly to customers and the market by creating shorter decision-making procedures and simplifying the relevant corporate networks. Both Ignacio Manzano, CEO of the Agora Group (the owner of Tradisa) and Dr. Jörg Mosolf, CEO of the MOSOLF Group, emphasised this point.

The change in share ownership does not alter anything for Tramosa customers and employees. Tramosa will continue all its business operations and activities in the field of automobile logistics in the French market as in the past.

A smooth transition is guaranteed. Luis Wilhelmi, a member of the Tradisa Group board, has been appointed director general of Tramosa with immediate effect. He will also take over the position of President from Robert Viruega, who is retiring, on 1 April 2017. Dr. Jörg Mosolf and Ignacio Manzano would like to unequivocally thank Robert Viruega for the work that he has performed with the Tramosa team.

MOSOLF will pool its activities in the field of automobile logistics in France within MOSOLF France, a company that was established in 2016. 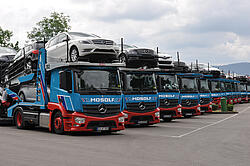