Skip navigation
At the autumn reception of the BDS (an association of self-employed workers in Germany), Dr Jörg Mosolf, Managing Partner and CEO of the Europe-wide MOSOLF Group based in Kirchheim unter Teck, gave a report on his company.

It is tradition for a member of the BDS to give a report at its autumn reception. This year it was given by Dr Jörg Mosolf inside the Henninger Hall in the Kreissparkasse in Kirchheim unter Teck. Mosolf is the CEO and Managing Partner of the company, which was founded by his father Horst Mosolf in 1955 and was purely a forwarding company in its infancy. Nowadays, the MOSOLF Group is one of the leading system service providers in the European automotive industry and the market leader for automotive logistics in Germany. According to Jörg Mosolf, its range of services covers the complete value-added chain for automotive logistics.

Besides Europe-wide vehicle transportation by rail, road and waterways, the family company also offers an extensive range of services including workshop services, special purpose vehicle construction, industrial coatings, the acquisition of vehicles that are at the end of their production cycle, checks, storage and transportation for these vehicles, and the recycling of scrapped cars.

The company has been constantly evolving ever since it was founded in 1955. According to Jörg Mosolf, it all started with a collaboration with Allgaier, a company based in Uhingen, which MOSOLF provided with transport services. In 1963, the company opened its first branch office in Antwerp in Belgium. In 1972, a further office was opened in Illingen in Baden-Württemberg. During the eighties and nineties, MOSOLF gradually expanded its networks in Germany and Central Europe.

The MOSOLF Group currently has around 3,000 employees, with 360 working at its headquarters in Kirchheim unter Teck. Jörg Mosolf, who has been the president of the Deutsches Verkehrsforum (a German industry association promoting efficient transport) since 2018, managed to astound his fellow entrepreneurs with some impressive figures: the company owns 8 million square metres of land, split up across its 38 technology and logistics centres. Besides 1,000 special transporters, the Group’s transport fleet includes 350 double-decker autoracks and two cargo riverboats. According to Jörg Mosolf, the boats have been in use on waterways since 1999 and the autoracks have been used to transport countless vehicles throughout the whole of Europe since 2007. “On average, we put around 140,000 cars into storage, and pick up, store and transport around 5.5 million vehicles a year”. This makes up more than 50 percent of the German market in this sector. Its customers include industry giants such as Europcar, Sixt and the Berlin-based Auto1 Group, which is a Europe-wide online car-trading platform that owns brands such as the well-known website wirkaufendeinauto.de. “For this company alone, we store and transport around 260,000 vehicles throughout Germany,” said Jörg Mosolf.

The MOSOLF Group has made the power of innovation one of its driving forces. This year, the company has diversified into electric mobility. It is now building fully-electric, lightweight commercial vehicles in Herne for the European market. “We've been collaborating with Tropos Technologies from Silicon Valley in California,” Jörg Mosolf reported. The name of their new electric mobility brand is Tropos Motors Europe. Potential customers include cities, towns and companies that are looking for emission-free transport solutions that are quiet and affordable.

The Group is also contributing to climate protection with its other current project, where it is collaborating with Canadian company dynaCERT (Carbon Emission Reduction Technology), whose HydraGEN hydrogen technology produces and delivers hydrogen for the combustion process in diesel engines. This improves the engines’ energy values, uses less fuel and also reduces CO2 emissions. “It’s our responsibility to make an effort to solve the problems that the logistics industry is contributing to,” Mosolf maintained. 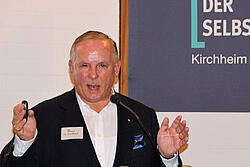