Kirchheim/Teck, 27.11.2019 – The Sino-German  Logistics Forum in Chengdu celebrated its successful premiere on 15 November 2019. The specialist symposium held to accompany the “China Chengdu International Supply Chain and Smart Logistics Expo 2019” had been launched to establish a platform for exchanging ideas on future developments and successful best practice examples in logistics between Germany and China. As part of the strategic alliance between MOSOLF and the Qingbaijiang District Government, the event was used specifically to promote the transport of finished vehicles on the rail link between Europe and China.

About 200 representatives from the German and Chinese governments as well as high-ranking delegates from the Asian and European automobile and logistics industry had accepted the invitation from the German vehicle logistics specialist, MOSOLF, and the Chinese regional government in Chengdu Qingbaijiang to discuss the possibilities and visions, but also the ecological aspects of the logistics sector in both countries. The initial event focused on the opportunities that arise for automobile logistics from a new rail link along the New Silk Road between Europe and China.

The conference had followed an agreement reached as part of the Belt and Road Initiative in May this year between MOSOLF and the Qingbaijiang regional government to establish sustainable rail traffic for finished vehicles between Europe and China. The railway line has been operating between Qingbaijiang station in Chengdu and Łódź since 2013. The route crosses the Chinese border at Alataw Pass in the Province of Xinjiang and then passes through Kazakhstan, Russia and the Republic of Belarus on its way to Poland. MOSOLF is therefore able to offer European and Asian vehicle manufacturers a reliable, low-cost, convenient and fast logistics corridor to transport finished vehicles to and from China.

In his opening speech, the Director of Qingbaijiang District, Chi Yong, referred to the strategic importance of the new route in strengthening economic cooperation between China and Europe. He said he was optimistic that MOSOLF would achieve its avowed goal of transporting 60,000 vehicles by rail from Europe to China within a period of five years.

Dr Jörg Mosolf, CEO of the MOSOLF Group, also used the event to appeal to automobile manufacturers and suppliers to cooperate more closely in future so that the new route would achieve the economic scale that will make it a viable and ecological alternative to the maritime and air links to and from China as quickly as possible.

Wolfgang Göbel, CSO of the MOSOLF Group and President of the Association of European Vehicle Logistics (ECG), underlined the significantly shorter transit time for MOSOLF’s rail model in comparison with the seagoing route in his lecture entitled “The fast way from Europe – the best way to Europe”. He also forecast more fully-loaded trains on the rail link between Europe and China during the next few years. 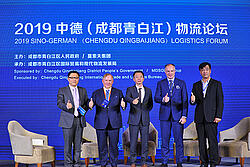 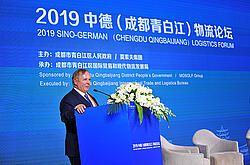